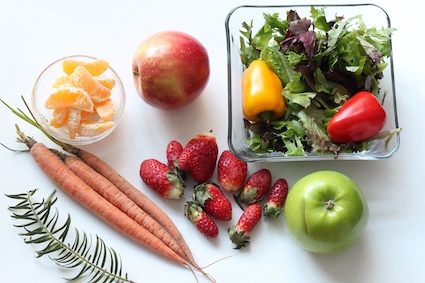 Knowing full well that we are the sole guardians of our own health and well-being, the best policy is to eat as close to natural foods as possible

THE MEMORY IS BLURRED. BUT I COULD have been about nine years old when my father ordered my younger brother and me to bed without dinner. Because we had complained about the food we had been served that night.

It was exemplary punishment from which we learnt our lesson. Since then neither of us has complained about what is served on the family table. My father is not a tyrant by any standard of measurement. On the contrary although often stern, he rarely ever reprimanded us. But on this occasion he felt it incumbent upon him to pull us up. Looking back, my two brothers and I are happy about it because we were taught early in life to be grateful for whatever is put on the table.

Obviously, that lesson was meant to be a part of our learning curves. It has helped us be welcome guests anywhere and travel the world without being fussy and finicky about food. None of us live to eat. In fact food is something we need to give attention to lest we forget to eat with other activities keeping us busy. Therefore if at all, we tend to worry about eating too little rather than too much. Fortunately, over-nourishment the new disease of the 21st century, is unlikely to afflict us. That night’s hunger also taught me to empathise with the millions of our countrymen who go hungry to bed every night.

Anyway, that was how we were raised — with no pressure to ingest an arbitrary amount of food and no room to fuss over foods and foodstuffs. Today when I see people battling with weight and conse-quential health problems, I thank my stars I was raised frugally. My mother tells us how as a child I loved fruits but all she could afford to feed me was bananas.

Thus we grew up without food fads and fetishes including the usual craving for ice-cream. During my six-month sojourn in London at the age of 19, I would often eat two ice-creams and get away without adverse effects on my body. Now more than double that age I find one ice-cream in many months is all I can have. Not because my taste buds have changed but because of the poor quality of ice-cream available in the marketplace.

SOME MONTHS AGO I HAD DINNER AT MUMBAI’S Willingdon Club and though I’m not a great ice-cream lover any more, I ordered one with nuts to keep my friend company. I instinctively realised even as I ate, that the nuts were rancid. But being taught not to waste food I ate all of the one scoop of ice-cream. How I wish I hadn’t! How I wish I had listened to my body and stopped with the first mouthful. The next morning I had a massive headache and ended up with the worst ever attack of viral fever. The colder than necessary air-conditioning at the club no doubt contributed its bit. But I have since made a resolution never to eat against my instinct.

Subsequently I was hardly surprised when a friend referred me to a cover story of the Ahmedabad-based consumer watchdog magazine Insight which trumpeted Ice-cream: Germs Found in Some.

You’ll need to read the Insight feature to learn all the details. According to the mag’s sample-based research, many brands fail on the bacteria and specified protein count. Also what is amazing is that the Prevention of Food Adulteration Act, according to this feature, makes no mention of minimum bacteria count or maximum sugar content. The bacteria standard is taken from specifications laid down by the Bureau of Indian Standards. Of course many manufacturers blame the breaking of the cold chain, retail handling and electric power cuts for standards not being maintained.

Consumers rarely look for dates of manufacture of ice-cream before purchase which is impossible to do anyway when it is served in a restaurant. Even when buying a cup or stick of ice-cream how many of us really check the date? And often the date is not on individual packets but on whole containers  bought by the retailer. So we are at their mercy. Whom do we blame when a substandard product causes us to suffer ill-health and loss of precious time?

THE POINT THAT I ALWAYS LIKE TO MAKE IS EVEN IF there is a minimum and maximum specification be it for total colony count (number of live bacteria in a food item), e-coli count (bacteria causing gastro-enteritis and urinary tract infections), coliform count (reveals post pasteurization contamination), sucrose count, milk fat, or pesticides, what are the standards that have been set and — more important — observed? The fact that we are alive is not necessarily an indication of good manufacturing practices.

Do the standards — if any —take into account the fact that people have different immunity and resistance levels? No government department seems to take into consideration that an excess of any of these bacteria and ingredients can make the susceptible very ill.

The belated ban on Endosulfan which was hitherto routinely sprayed on cashew trees in Kerala and which has maimed and handicapped thousands of children indicates that the use of pesticides and preservatives needs to be severely restricted. Are there really any safe limits? What happens when a child is given food over-dosed with preservatives? What happens when we consume foods with preservatives? Who is to advise us whether we have surpassed our tolerance limit? Informative though the Insight article was, it did not touch upon the effects of preservatives and other additives  used in making ice-cream. You can be sure they are used because home-made ice-cream is an entirely different experience. Because you don’t ingest chemicals.

Therefore knowing full well that we are the sole guardians of our own health and well-being, the best policy is to eat as close to natural food as possible. Make it a habit to read labels (items not understandable are not good for you!), preferably eat at home, heed your body’s warnings and eat only enough to fuel your body. Find other ways to feed your soul!