Killer lifestyles of the rich 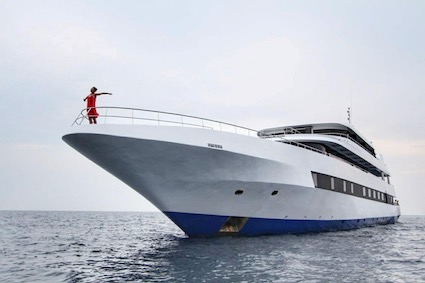 When profits become more important than humanity and its habitat, we begin a vicious cycle that endangers all life and happiness on earth

WHENEVER I GO TO THE MOVIES IN Mumbai, where I have grown up, I am
confronted with a grim reality of the wretched lives of millions of Indian citizens. After midnight I am often compelled to view my fellow citizens sleeping by roadsides, where even angels would fear to tread. But given no other option, the poor are probably grateful to have that space in a city where motorcars have more rights of way and space than human beings. I am often appalled at how many of my friends drive without any courtesy given to pedestrians. In any case driving in the city has become so aggressive that road rage has made the experience very unpleasant.

Of course worse than road rage and traffic is the pollution created by the use of unclean fuels like petrol and coal. The greenhouse gases released by petroleum fuels play havoc with the ozone layer guarding the earth’s atmosphere. Sitting in our homes and offices we can pretend that we are far removed from the ramifications of our actions and choices. Then when the weather gets too hot, or rain clouds disappear and water becomes scarce, or your child gasps for breath because of polluted air, we wonder what’s going wrong.  Little do we realise that switching on the air-conditioner, using private trans-port, letting water run while washing and bathing and other such wasteful acts are the very causes of  our multiplying environmental problems.

In fact the production and purchase of most goods whether essential or otherwise, contribute to greenhouse gases and chemicals being washed into our water systems. Every action of ours boomerangs on us as things  have a way of doing in this universe. So we end up with a poorer quality of life due to our own ignorant ways of living.  Natural products like khadi for instance don’t cause pollution. But these days khadi is coated with chemical colours which get washed into our water at the production stage. So too with pottery, when chemical colours are used. I was amazed to learn during a handmade paper-making  workshop that caustic soda and tonnes of water are used in the process.

I AM NOT SUGGESTING WE CHANGE EVERYTHING WE DO because no one can stop wastage completely. The first step is to become aware of these facts and their correlation with environmental pollution and degradation.

The pesticides and chemical fertilizers used in our food chain are major contributors not only to soil pollution but also to  health problems. Even more grave is the danger to farmers who suffer whilst spraying dangerous chemicals. Continuous use of chemicals makes the land saline and eventually destroys every form of soil life, leaving farmers with the burden of high costs and barren unusable land. No wonder suicide is the option chosen by many suffering farmers. To regenerate their land by re-adopting traditional methods often takes the time small farmers are unable to afford. Thanks to fertilizer and chemical manufacturers and unhelpful bankers, most of them are neck deep in debt.

So what we really need to do is reflect on our lifestyles and as suggested in earlier articles on this page, need less, use less, buy less. All citizens need to contemplate about alternate energy possibilities and simpler lifestyles.

This was what the Earth Summit in Johannesburg last month was supposed to be all about. How can we live on planet earth without endangering its resources? But I often wonder how effective such summits can be when business corporations driven by the profit and more profits motive set the agenda and sway decisions in their favour. I am not implying that being in business is bad. But when profits become more important than humanity and its habitat, we begin a vicious cycle that endangers all life and happiness on earth. Don’t business houses care about the kind of habitat they’ll leave behind for succeeding generations? Is it their ignorance of the ramifications or simply selfishness?

THE CARBONATED SOFT DRINKS MULTINATIONALS COCA Cola and Pepsico, Birla White Cement and seven other companies have been fined Rs.100,000 each for painting their advertising messages on giant rocks in Himachal Pradesh. It gladdens my heart to learn that even silent rocks have guardians and spokespersons today.

In a talk show aired by BBC on the eve of the Jo’burg summit which had participants from all over the world including India, Sunita Narain from the Centre of Environment & Science, New Delhi spoke of the urgent need for renewable energy at whatever cost. A Nobel laureate, whose name I didn’t catch, said that one percent of the world’s very rich use as much of the earth’s resources as 57 percent of the poor. A gentleman from the US of A very clearly spoke about  America’s need to be democratic in every way. He revealed that if just one cent of every $10 earned was donated to help  the poor, there could be a dramatic improvement in the world situation.

I also wonder when it will be that environmentally friendly solutions like solar and wind energy will cease becoming entangled in this whole web of debits and credits. We need to remind ourselves that money came into being for peoples’ convenience and not for us to be ruled by it. Then maybe nations would not pride themselves in being rich but would be ashamed that in spite of their wealth they are unable to see all inhabitants of this planet adequately fed, clothed and sheltered.

They need to become aware that despite their wealth they have created an environment which has degraded the quality of life instead of enhancing it. That future generations will be given the inheritance of an unsustainable world in which being rich or poor will be of no consequence. Both will suffer in different ways. Including those who cared.