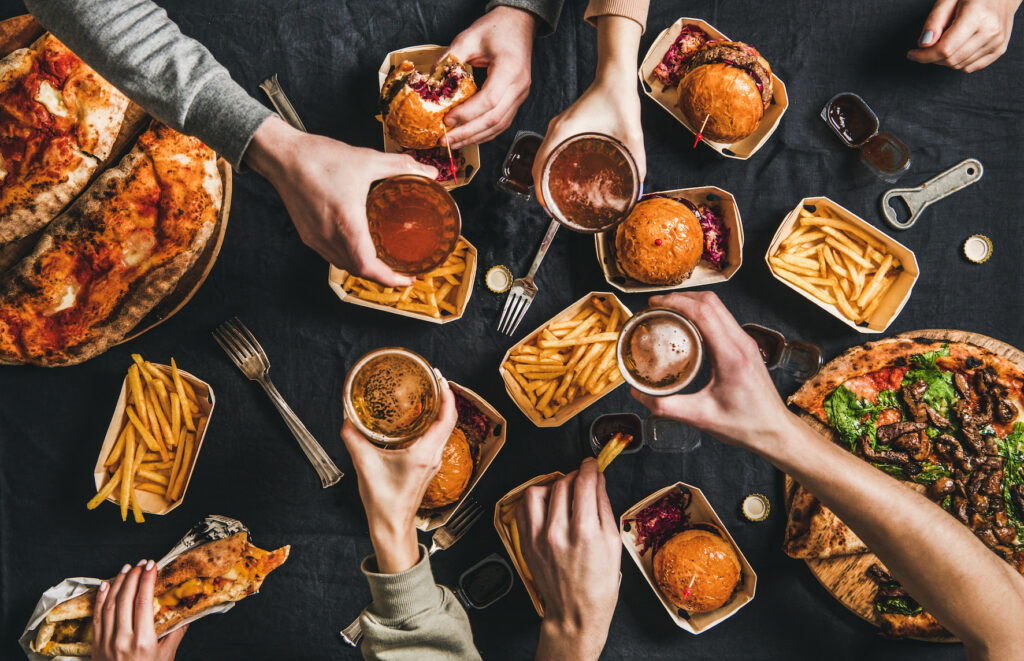 With the influx of western fast foods into India, one has a chance to compare our fast food with theirs.  And there are many reasons why I prefer our fare to theirs

I ACKNOWLEDGED MYSELF AS A SUCCESSFUL nutritionist only recently, the day I received my son’s first e-mail from his college in the United States. Among the first things he says he is missing is his hitherto forced intake of fruits and vegetables. Am I pleased! To think that my teenager isn’t excited about pizzas and burgers! That’s quite an achievement for me, especially that now seven months after having been on campus he says, “I can’t look at another pizza or burger.”

But since his two meals a day are paid for, he is stuck with institutional fare. Besides there isn’t much available on American campuses anyway other than more of the same. And since the closest supermarket is quite far away getting fresh fruits and edible vegetables is quite a problem. Recently over the phone he mentioned he’s eating cake for breakfast and it totally freaked this nutritionist mother until I realised he was kidding. But knowing how there is always some truth in a joke, I am quite sure that he wasn’t entirely joking either.

Enough of sounding like a love-sick mother. I mention all this only to get to the issue of fast foods. With the influx of western fast foods into India one has had a chance to compare our traditional fast foods with theirs. And, there are many reasons why I prefer our fare to theirs.

First, the word ‘fast food’ is misleading. Because generally speaking even traditional cuisine of society when delivered quickly in ready-to-eat style is loosely termed fast food. The actual pre-preparation of these foods is not fast at all. Only the over-the-counter serving of it is almost instant-aneous. I’m not talking about pre-packaged foods like Maggi noodles, ready mix soups or now even ready-mix dal and vegetables. The foods I’m referring to and comparing with western fast foods in this article are of the dosa and bhelpuri type which are served in a flash in the many formal and informal eateries that line the streets of India’s towns and cities.

THE COMPARISON I AM MAKING IS ALSO NOT about hygiene because whether one eats at a 5-star restaurant, in a small roadside café, at a McDonalds or at a hawker’s roadside stall, one is always at the mercy of the cook, waiter and others involved in the service chain. Only in your own home can you have control over hygiene factors. Often even the eating places that look clean are only superficially so. And let’s not believe that in the West everything is perfect. My son has also informed me that it isn’t just traditional Indian cuisine that he is missing but also the clean home kitchen!

And then of course there is the deeper question of what’s the benefit of all the hygiene in the world if food has been sprayed with pesticides and chemical fertilizers used in the soil to increase productivity and profitability. Worse still, what use all the washing and cleaning when the seeds used to grow the food on our tables are genetically modified?

So all else apart, in terms of nutritional value Indian fast foods — be it a sandwich on the street, a packet of bhelpuri or a dosa — are better balanced than western fast foods like the hamburger or pizza and the accompanying cola without which washing it down is likely to prove difficult. And of course our kulfi beats their softees and other chemically processed desserts.

Take for example the ubiquitous bhelpuri. There aren’t many who can resist this combination which is great as a snack anytime and can be a meal if one wants it to be. It’s base is puffed rice and gram flour which are both high value foods. To this is added fresh onion, coriander leaves, potato, chilli to taste, whole wheat puris and tamarind chutney. So in one serving you have vitamin C from the chilli and tamarind, and jaggery in the chutney invested with iron and energy. The wheat, rice and gram flour combine to give you protein. In fact all food groups are well-combined in this single dish! If a good medium is used to fry the flour and puri, even that would be beneficial as fat to you. In fact as I’ve always maintained if quality base ingredients, i.e right type of salt, sugar, cereal are used, the end result will always be a health food i.e a highly nutritious meal which is good for you.

EVEN THE DOSA OR IDLI, ESPECIALLY IF MADE with par-boiled or unpolished rice is a complete meal of known and unknown ingredients. The accompaniment of chutney and vegetables makes it wholesome. If only restaurants would desist from cost-cutting by using the cheapest cooking oil! And if only every company vending refined oil would not let every restaurateur believe that theirs is the best cooking medium which is “good for health”.

The simple vegetable sandwich of the roadside stalls and peanuts (with onion, coriander leaves and lemon) or roasted gram, are not only delicious indigenous fast foods, but also have nutritional value especially if the bread is whole grain. Even if not, it’s a much better bet than hot dogs, pretzels and the like.

So recently when a friend was praising the hygiene at the local MacDonald’s I wondered which was the lesser of two evils when one is compelled to eat out: hygienically prepared junk food that won’t do you any good, or nutritious indigenous fast foods which may be hygienically suspect.

As an Indian with strong intestinal flora, and as a nutritionist I always choose the latter. The first choice always  being food prepared at home, especially by my own hands. an Our fast foods and their fast foodd their fast food