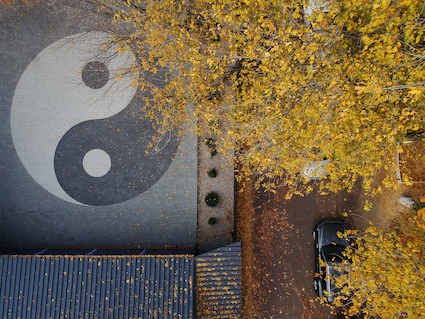 Yin-yang was developed through the 5,000-year-old philosophy of the Orient. It is the biological and physiological foundation of the major religions of the Orient

If we were living in wildernesses and depended on our instincts, rather than intellect and had to choose from a variety of natural foods that grew around us or needed to hunt, we would do alright. Today, however, modernisation has made so many food choices possible and not all to our benefit.

Diet books and media confuse further, luring us to follow new diets which appeal to the intellect with all kinds of data and deductions. Luckily for me, the natural nutrition I studied has made me aware of the pitfalls of short-term diets. I’m convinced that all of man’s discoveries and human intellect will never be able to fully understand nature’s infinite wisdom. The more we discover, the more we should appreciate nature’s magnificence and the need to focus on the natural rather than the man-made.

Although I have always been convinced about the virtues of the natural order, clear guidelines came to me only when I was led into the fascinating world of yin-yang. Until then — although my study was scientific, logical, correct, natural and appealed to my commonsense and intuition — my Indian mindset made me yearn for more substantial evidence to back my pro-nature ideology. Fed up with doctors, medicines, aches, pains and fatigue, I needed assurance that the changes I was making in the lifestyles of my family and myself were justified.

In the yin-yang philosophy, I found it. We have all heard about it and seen its sign on various books, on lockets, in new-age cafes, etc. But few know the meaning behind it. Yin-yang was developed through the 5,000-year-old philosophy of the Orient. It is the biological and physiological foundation of the major religions of the Orient.

Yin-yang principles can be applied in our daily lives at every level, be it at work or home, in the marital or social spheres. The rediscovery of these ancient truths and making them comprehensible and applicable in the 20th century was accomplished by the Japanese philosopher, George Ohsawa.

In his outstanding book Zen Macrobiotics (published by George Ohsawa Macrobiotics Foundation, 1965), Ohsawa comments: “I have lived for 67 years in the philosophical climate of the Orient where my life was saved only because western doctors decided I was beyond help. I thus had the good fortune to avoid the tragic fate of the rest of my family, all of whom had put their trust in western medicine: my mother died at 30, two sisters died before they were 10, and my younger brother succumbed at sixteen. I alone was saved by the ancient medicine of the Orient. After this narrow escape at 18, I decided to dedicate the rest of my life to the task of telling people about the old and supposedly obsolete medicine, a goal that I have achieved.”

Ohsawa introduced the yin-yang philosophy to the West where it is popularly known as macrobiotics or the art of longevity and rejuvenation. He describes it as the divine medicine which he spent his life interpreting. In the modern maze, it is one of the very few systems that offers daily guidelines for getting the most out of life. It lights up a path which leads to true and supreme health, eternal happiness, infinite freedom and independence, and a sense of absolute justice (laying the foundation for peace). A totality which is infinitely adaptable.

In all his works Ohsawa emphasised the need for practitioners of medicine to address the root cause rather than mere symptoms of illness and disease. “Organised medicine attacks microbes, virus and other imaginary enemies of man. Yet all of these organisms are creations of God, just as men are. Medicine neither asks why God created them in the first place and re-creates them day in and day out, nor why and how some men are attacked by them while others are not. It appears that Oriental medicine alone finds their existence in the healthy human a natural state of affairs.”

The panacea for the ills of humankind, according to Ohsawa, is infinitely simple: stop violating the universal order and allow nature to do her miraculous work. But people can assist nature in the following ways:

Eat natural foods. Look for organically grown food. Yes, this is Ohsawa’s first rule. Don’t let the search for good, safe food be the last on your list of priorities. It’s food which creates blood, which makes you.

Resist medication or surgery. Unless of course it is to mend after a physical accident or something similar. Medicines only treat symptoms without addressing the root causes of illness and disease. Not heeding the body’s signals is tantamount to ignoring its advice to reform your ways and medications merely dull your senses and awareness. Macrobiotics interprets sickness as an attempt by the body to return to its harmonious and dynamic natural state.

Avoid inactivity. The foundation of macrobiotics is the understanding that through the process of transmutation, our bodies can produce all they need for health from simple diets which are in harmony with natural laws. Ohsawa says, “We have the capacity to manufacture what we need for health within our bodies”.

Cook creatively. Living the macrobiotic way requires you to be a creative cook who understands the art of yin-yang balance — the balance of the seasons, the balance of mind and body, the preparation of food, its balance and presentation. “To live is to create. Without creating, we cannot exist, for our bodies create blood from our daily intake of food and beverages. Blood creates or motivates all our activities.”

The reason I have so extensively quoted Ohsawa is for you to savour his words. To end, a last quote: “You are the salt of the earth. You can change your destiny ! You can give birth to a new civilization or you can create hell on earth. You need but change your orientation.”

We can truly recreate ourselves and our existence. If we want to!